Introduction
There is anecdotal evidence amongst some hoof care professionals that dumping or rounding the dorsal hoof wall adds strength and durability to the dorsal hoof wall. Some hoof care professionals also say that during the shoeing period the hoof capsule bends or collapses, leading to a dip half way up the dorsal wall, the clip to leave the wall and risen clenches. Yet the nails haven’t grown in length, so what has happened? (Figure 1.)

Over the last decade the author has been determined to investigate this hearsay experience. During this period, the author has conducted several studies. To ensure the validity of his results the author conducted a study containing statistical data. It was submitted and passed in achieving the Fellowship of the Worshipful Company of Farriers 2017.

The equine hoof serves as the interface between the ground and the skeleton of the equine limb. Its structure is capable of dissipating forces associated with impact shock and loading. Hoof care professionals insist that the correct foot balance is critical in maintaining health and biomechanical efficiency (Johnston and Back, 2006). During the last century, various models of hoof trimming and correct hoof balance, largely based on the historical works of Russell (1897) and many others (Dollar & Wheatley, 1898; Magner 1899), have been debated, yet to date there is little in the way of scientific data and agreement on the optimal model of hoof conformation. Historical observation, the personal experiences of individual farriers and beliefs and successes of their practical application have sustained the activities of trimming and shoeing for thousands of years.

Conventional farriery teaching is based on the principal that the bearing border of the foot (BB) should be trimmed perpendicular to the longitudinal axis and this is reiterated in current texts (Williams & Deacon, 1999; Curtis 2002, 2006; & Stashak, 2002). These authors acknowledge the importance of achieving correct hoof pastern axis (HPA) and assume that trimming will centralise the point of force (POF) within the hoof capsule. The maintenance of normal HPA can be achieved by aligning the dorsal hoof wall angle (DHWA) with the angle of the central axis of the phalanges.

Anecdotal evidence amongst farriers suggests a link between excessive thinning of the DHW, and the subsequent loss of integral strength, and a loss of solar arch depth. Historical texts (Hickman & Humphrey, 1988) have categorically stated that rounding of the DHW (dumping) is a factor that is potentially detrimental to hoof health. However, in recent years dorsal wall rounding has been advocated as a method of retaining DHW integrity in those feet considered to be weak and subject to excessive distortion (Ian Allison, personal communication).

The current study will examine the effects of both trimming methods on a range of hoof measurements over an extended period.

Visual results Horse B. The dorsal rounding side (left fore) is not the cosmetic, sharp, straight, crisp look that clients and other professionals are used to seeing. They will need to be educated about this technique. The flat-lined dorsal hoof wall collapsed and migrated forward. This also led to dorsal shoe migration. There is a clear dip in the dorsal hoof wall of the flat line dressed foot and all the clenches have risen.

Conclusions and clinical relevance
In conclusion, these results suggest that different trimming techniques can affect the mechanical behaviour of the hoof wall and, under certain conditions, the loss of integral strength of the DHW. Combined with shear force created by extended extensor moments on the hoof this may well affect the solar arch morphology. It would appear that dorsal rounding might deflect force vectors associated with the elastic deformation characteristics of horn. These results suggest that the dorsal rounding method might prove to be of benefit to the overall health of the hoof by inhibiting excess DHW and solar arch deformation. The author plans to research this subject further in the future and to do more workshop/lectures on promoting the correct application of the rounding technique. It is very important for the dorsal wall rounding technique to be well taught and to accompany solid sound farriery basics. 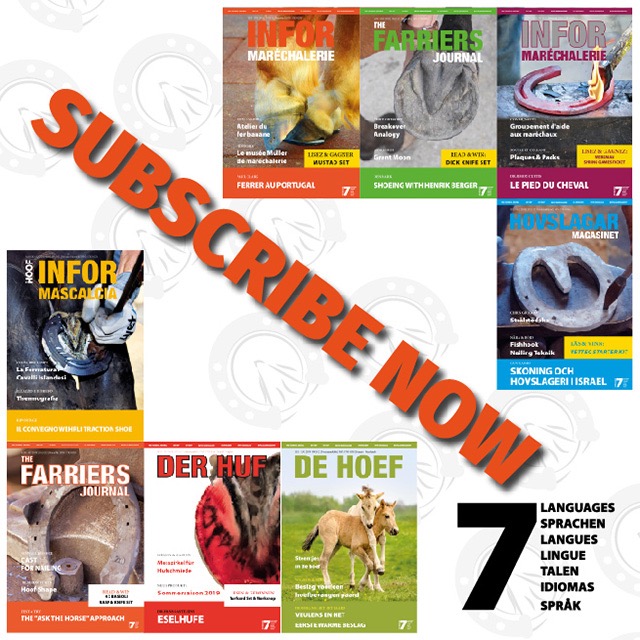