Rocker-Roller-Set back toes-what percentage of the horses you shoe gets one?

When we go diving, we employ swimming fins or flippers to extend the length of our feet and make it easier (yes, easier) to swim through the water. Now it does take more from the motor (hips, knees, ankles, muscles) to move our legs with the fins, but the effect in the water is great. If you take them off, you will obviously have a lot less stress on the motor, (like shoes that have a rocker toe, rolled toe, square toe, equilibrium toe, omni breakover,) but do you want less stress on the motor? Figure 8 is a diver with and without swim fins. Which one would go faster, further, and with less effort? I would contend that you want to be able to do the job at hand if the motor is able to handle the workload. Take off those flippers and you won’t get very far very fast. Just like a horse. If you have a physical problem that does not allow you to use the full fin, you might want to use a smaller fin to swim. This will allow a weaker system to still operate. But the person that is sound and strong will find the pearl in the oyster as they speed past you with their full length flippers.

The point is this. If the horse is sound and strong, the normal toe-length and breakover are a big part of what allows the horse to do their job well. Putting a rocker toe on a horse to ease breakover is not always needed, or even always a good idea. I grew up in the sport of rodeo. My main event was steer wrestling, which is where you run by a steer and jump just behind their horns to throw them to the ground. It is the sport of kings and quite a lot of fun. However, your horse has to have a lot of speed and the ability to start with a lot of force to catch the steer as fast as possible. You are being timed and the fastest time wins the rodeo.

Now imagine if your horse had a greatly reduced angle of breakover or a reduced toe length, or both.  In this case a rocker toe as in figure 4.  The ability of the horse to perform at maximum level would be impaired because he would be trying to swim without his flippers.  There are a lot of events like this in different disciplines.  In reality, any horse that is strong and sound will benefit from having the shape of foot that God gave it with the full complement of toe.

That is not to say that there is not a place for mechanically easing breakover.  Just as there is for humans at times.  When we have a damaged leg, often times the doctor will use a walking cast on us.  With this, we are able to get along while the leg heal.  It has enhanced breakover to take stress off the leg while it heals, but if it were such a great thing, we would be wearing walking casts on both legs all the time to perform better.  It would ease our breakover, but we would not be able to do what we wanted at the level we wanted to do it at.

If you have a horse with a problem, then you should certainly be using the things mentioned to take the stress off the system while it heals.  Just be sure you understand completely when the mechanics should be added, and what they might cause for the horse that does not need them. 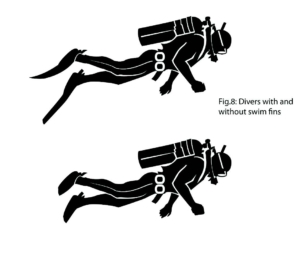 Divers with or without swim fins

Order The Farriers Journal No. 194 to read the full article or get a full print/digital subscription. 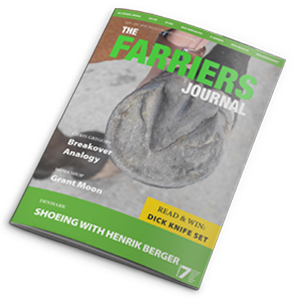