Does a sound horse moving on a circle show symmetric or asymmetric hip movement?

Lungeing and movement – Asymmetry vs. Lameness

Lungeing
Lungeing is the most common and practical way to observe a horse moving and is often performed during lameness exams and pre-purchase examinations. During lungeing bilateral lameness may be visualized and there may be differences in the severity of apparent lameness between the straight trot and working on the left and right rein. Head and pelvic movement symmetry and asymmetry are common landmarks used for lameness assessment. In a study of 201 horses that were free from lameness according to the owners, movement symmetry was registered objectively with inertial measure units during straight line trotting (1). Horses with symmetrical movements on the straight were measured during lungeing to the left and to the right. The most prominent effects of lungeing were changes in the vertical movement symmetry of the pelvis. The pelvis will sink down lower during the stance phase of the outer hindlimb than during inner hindlimb stance. This normal movement asymmetry mimics impact lameness of the inner hindlimb. Similarly, the pelvis rises higher after inner hindlimb push-off, than after outer hindlimb push-off. This normal movement asymmetry mimics push-off lameness of the outer hindlimb. Lungeing also influences movement symmetry of the head but in a less predictable manner. (1–3). The aforementioned circle-dependent asymmetries are influenced by both circle radius and speed, (3) which should therefore be standardized during lameness evaluations when comparing lameness during left and right direction on the circle or before and after diagnostic analgesia or treatment. There is also an effect of ground surface where horses objectively quantified as lame on the straight showed decreased movement symmetry during lungeing, in particular with the lame limb on the inside of a circle on hard ground. (4). Differentiating these circle-dependent asymmetries from asymmetric movements due to pain (lameness) (5) can be challenging.

Order The Farriers Journal No. 189 to read the full article or get a full print/digital subscription. 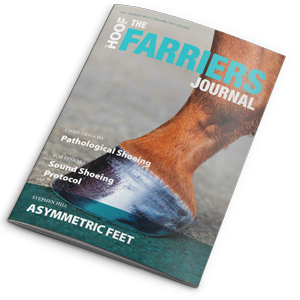