How do you treat a common extensor tendon rupture in foals?

Veterinarian and farrier Dr. Charlotte von Zadow shows how to build an artificial tendon that can be applied during the healing process:

Common extensor tendon rupture:
A foal with a ruptured common extensor tendon shows swelling on the dorsolateral aspect of the carpus and an abnormal pattern of movement: The foal may fling the leg forward to move it or stand/walk on the dorsal aspect of the fetlock. The difference compared to a hypo-extension due to contraction is that the limb can be extended manually. If the foal is standing/walking on the frontal aspect of the fetlock it helps to create a toe extension on the foot. The extension is connected to a bandage by means of a rubber tube (Fig. 1). In this way, the foal develops a more normal way of moving and is often able to use its limb without the rubber tube after just a few days. After removing the rubber tube, I leave the toe extension on the foot for four to five more days. Only then do I remove it, too. Typically, no further treatment is needed.

Rupture of the common extensor tendon. As
the foal could not move the leg unassisted, a rubber
tube was used to create a kind of “artificial tendon”.
The rubber tube is often needed for only a few days.

Order The Farriers Journal No. 191 to read the full article or get a full print/digital subscription. 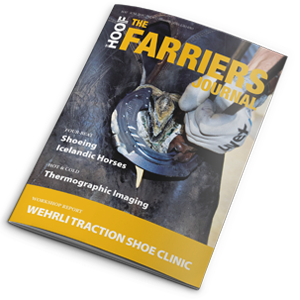