Is there a difference between breakover and loading cracks?

US farrier Scott Lampert explains how to tell what kind of crack you are dealing with:

For Scott Lampert, quarter cracks can be divided into two basic groups:

Loading cracks and breakover cracks.
During his career, Scott spend countless hours filming horses and evaluating the videos. During filming he realized, by chance, that there seemed to be two kinds of crack that could seem similar when you look at the standing horse but opened up or moved in completely different moments of the stance phase when the horse was moving.
A loading crack opens or moves when the foot is being loaded during landing to mid-stance. A breakover crack opens or moves during the breakover phase (heel lift to toe lift). For successful treatment, it is critical to identify which kind of crack you are dealing with.

How to evaluate:
Scott feels the best way to evaluate the different cracks is by simply filming the horse’s foot using a smartphone. First, the horse has to be standing on hard, level ground. The key to this process is holding the camera/phone at the same height as the horse’s foot and NOT moving the phone while the horse is moving. The camera stays completely stationary during this process.

For the first part of the evaluation you start filming the cracked hoof at hoof level and ask a helper to pick up the contralateral limb. Standing on one front or hind foot will put more weight on the other front or hind foot, similar to the situation during landing to mid-stance. For the second video the phone is held in the same way and the helper is then asked to just walk away with the horse in a straight line. In that way, the horse’s foot moves out of the picture as you film. From personal experience Scott wants to make sure that when you videotape medial cracks on front feet you remember that the horse has hind feet that will be coming your way shortly after the front feet have moved past. Laughingly he says it might be wise to use a smartphone that belongs to someone else for the first try!

Replaying both films in slow motion will enable you to identify if you are dealing with a crack that is affected mainly during loading or breakover. This information is crucial for treating it, as the shoeing approach is different for the two different types of crack. Scott says that some cracks also seem to be a combination of both types. Therefore, their treatment must combine the two approaches, too.

Order The Farriers Journal No. 186 to read the full article or get a full print/digital subscription. 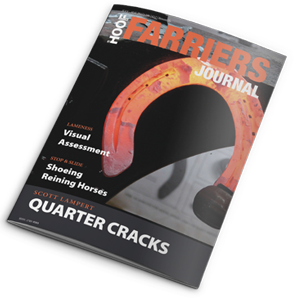