Do you choose keg shoes according to their coarseness?

Why the farrier is the only person who should decide which shoe to use.

Share this article with your trainer and vet friends and team partners to help them understand why some decisions in shoeing should be left to the farrier:

Keg shoes come with a defined coarseness. The coarseness of keg shoes can be changed by re-stamping them by means of a stamp and pritchel. In practical application this is rather uncommon and mostly done in special cases. In such situations, handmade shoes are superior, as the farrier decides from the start which coarseness the shoe should have.

Based on anatomical aspects, the individual hoof greatly influences the decision about the correct coarseness.

Depending on breed and type even, horses with the same size feet can have different wall thicknesses. Modern sport horses with a strong Thoroughbred influence and thin-walled Thoroughbred-like feet are typical examples of this. On the other end of the scale we have traditional Warmblood bloodlines with strong, thick-walled hooves. If the same model of shoes and way of fitting the shoes to the hoof are used on these two types of horse, one of the following is likely to happen:
If too coarse a shoe is set on a foot with thin walls there is the danger of hot-nailing the foot, as the nail holes may be placed inside the white line. In practice this happens less often than the second possibility, which is that if a shoe that is not coarse enough is set on a foot with strong, thick walled hooves, the resulting damage will unfortunately often take a while to occur. Here the nails are positioned too much to the outside, so that they sit in the wall, rather than in the white line where they should be. Therefore, the quality of the hoof walls is severely damaged. Often a treatment with nutritional supplements and other hoofcare products is started, or even horseshoes in general are seen as the root of the evil, whereas, unbeknownst to everyone, the cause of the damage is the incorrect nail placement.

For the practical work this means that the vet should say what effect the shoe should have rather than prescribing a certain factory-made horseshoe model.
Therefore, it is better to communicate the intended effect of shoeing and leave the decision about which model to pick to achieve this effect to the farrier.
As mentioned above, the fit of the shoe – whether the shoe is fit wide or with a tighter “English hunter style” fit – has a strong influence on which coarseness to pick. This will be a topic to cover in one of the coming issues.

Order The Farriers Journal No. 185 to read the full article or get a full print/digital subscription. 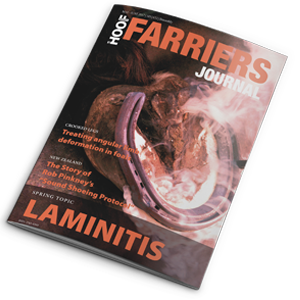